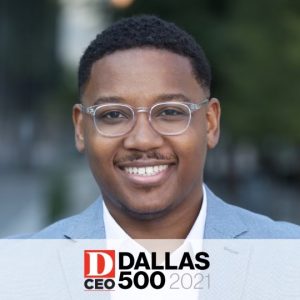 DALLAS, TX (December 1, 2020) – D CEO has named Impact Ventures CEO and Founder Benjamin Vann to their 2021 Dallas 500 list, recognizing the most influential leaders in North Texas. This is the first year Vann has been recognized with this honor.

The Dallas 500 list, featuring the top North Texas business leaders and executives, is the culmination of months of research, interviews, and conversations with extensive, high-level contacts in the regional business communities by D CEO Editors.

“It’s an honor to earn a place on D CEO’s Dallas 500 list this year,” said Vann. “I feel privileged to be named alongside such significant leaders in our community. I hope to continue to live up to this honor and help make a meaningful impact on the North Texas community and beyond.”

In 2019, he was nominated for Cosign Magazine’s Tech Innovator and Public Figure of the Year Award, as well as Entrepreneur of the Year Award in 2017. Awarded DFW Urban League Business of the Month, In 2016, he was featured in the 3rd and 4th edition of Who’s Who in Black Dallas Publication, In 2015, he awarded 40 under 40 Future Leaders in Dallas by i10 Magazine, named top 28 #BlackDFWMatters influencers, and featured on the cover of Be Great Magazine, Dallas Millennials Edition.

To learn more about D CEO’s Dallas 500 and order advance copies of the publication, visit the Dallas 500 website. For more information on Benjamin Vann, visit his bio.

About D CEO:
D CEO, a D Magazine publication, builds community among top North Texas executives with its insightful, authoritative, and provocative coverage of Dallas-Fort Worth business. The magazine provides expert analysis with regular columns on key business topics such as real estate, law, healthcare, and technology. D CEO has been named the best regional business magazine in the country for five consecutive years by the Alliance of Area Business Publishers.

About Impact Ventures:
Impact Ventures is a 501c(3) organization on a mission to eliminate the social and economic barriers for talented, yet under-estimated Women and BIPOC communities to build generational wealth through inclusive entrepreneurship and integrated capital. The Dallas Inclusive Capital Fund is place-based integrated capital fund investing flexible debt and patient equity in Women and BIPOC-led enterprises to build economic power and create community wealth.